Sunday morning, standing in front of the East Door as a greeter awaiting people’s arrival, The Spirit led me to turn in my Bible to John 7.

“After these things Jesus was walking in Galilee, for He was unwilling to walk in Judea because the Jews were seeking to kill Him. Now the feast of the Jews, the Feast of Booths, was near. Therefore His brothers said to Him, ‘Leave here and go into Judea, so that Your disciples also may see Your works which You are doing. For no one does anything in secret when he himself seeks to be known publicly. If You do these things, show Yourself to the world.’ FOR NOT EVEN HIS BROTHERS WERE BELIEVING IN HIM” ~ John 7:1-5.

I tried to read on, but God returned my focus to “For not even His brothers were believing in Him.” As soon as I finished rereading that, the Spirit of Jesus said to my heart, “Darlene, what would have happened if I failed to believe in Myself?”

Many did not truly believe Jesus was who He was. Many challenged Him and sought to discourage His progress. Jesus had to know within Himself who He truly was, or fall to the opinion of man, just as we must do.

If Jesus did not believe that He was the Son of God, miraculously birthed to Mary and Joseph, what would have happened? Many rumors floated around about Jesus: that Mary and Joseph fell to sin and He was truly the son of Joseph conceived out of wedlock; that Mary committed adultery; that Jesus was the product of rape; etc. If Jesus believed the many rumors floating around about Him, how would He have developed the heart to be busy about His Father-God’s business as He did, finding the work God truly intended Him to fulfill? If He failed to believe that He is the Christ, sent to do the will of God, what would He have accomplished? If He believed the testimony of other men about Himself, would His ministry on the earth to train and raise up Apostles to begin His church have happened? Would the result of that work continue today?

What if Jesus failed to believe that the prophets of old spoke of Him when they wrote, “For a child will be born to us, a son will be given to us; And the government will rest on His shoulders; And His name will be called Wonderful Counselor, Mighty God, Eternal Father, Prince of Peace.” Might He have chosen to take the offer given during the temptation in the wilderness when Satan offered Him the world? Failing to realize that He is already King of God’s entire Kingdom, which includes and transcends the world, would He have chosen the lesser, thus failing to accomplish the greater?

What if Jesus failed to understand that God was the One who established and protected His path: would Jesus have so fearlessly walked in and out of mobs of people, many set against Him and purposing harm to Him? Would He have stood still, quaking in His sandals, while the mob from His own town threw Him off the cliff, instead of boldly walking out of their midst, unharmed, knowing His time had not yet come and He was under God’s protection until the hour set for Him?

If Jesus failed to believe Himself to be the Son of God, God incarnate, having full access to the resources of God’s Kingdom: would He have healed anyone? Would Lazarus have remained in his tomb on that fateful day? Would the disciples have drowned when Jesus failed to cause the storm to cease? 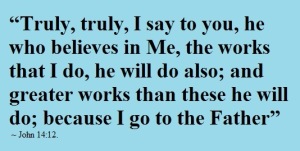 Now, what of you and me, beloved: do you believe what God says is true of you as His beloved, chosen child, equipped for good works? God tells us corporately who we are in Scripture, but if we fail to believe it, how will we walk in that truth? God also speaks to us individually, instructing us concerning who He created us to be and telling us all He created us to accomplish in this life. Fail to believe and receive that which He says is true of us, and we will fail to walk in the power of His provision.

In fact, any failure to walk in His power that exists within us now is due to our failure to believe all that He says is true of us. Are you beat-down by life, left curled in an infantile ball, useless in the hands of God? Beloved, check to see what God says is true of you. Find where your faith has failed so you can unfurl and soar in the strength of His supply. Find where the taunting lies of life’s trouble has injured you and come into the healing balm found in believing God over one’s circumstances.

God may touch one every time they read about things like the woman who fell to the feet of Jesus and washed them with her tears. Their heart may be that of worshipping Him and laying the hardships of life at His feet. Failing to believe they can touch the feet of Jesus, will they reach His heart and move His hand as God intends? The enemy uses our circumstances to lead us to doubt God in the very things He calls us to trust and believe concerning our call and equipping through Christ.

For me, my heart is continually grabbed by words that speak of writing or speaking His word:

“The Lord God has given Me the tongue of a disciple and of one who is taught, that I should know how to speak a word in season to him who is weary. …” ~ Isaiah 50:4, AMP.

Writing and speaking the truths of God I know, feeding all He is and all He does into the lives of others, this is my calling and equipping. It is in me, making me who I am, forming my desire for my occupation and the work to accomplish. God uses my mouth and calls me to be His disciple, equipped and enabled to disciple others. He uses the ponderings within me to form posts meant to encourage you, helping you come up higher in your faith, and empowering you to move through life with increased power, resolve and assurance of faith. Any success achieved is because God said it and I believed it so-as-to obey.

In reverse, the enemy of God uses every frown of disapproval, every harsh word of refusal, every rejection to cause me to forget who I am in Christ and fall away from the path God has for me. The struggle that comes to my flesh as I grow in these things so that I have experiential knowledge to share with you often tempts me to believe I am unworthy of passing these things on to you, despite God telling me repeatedly that I am chosen and not rejected. My inability to see beyond my here and now struggle and receive God’s eternal proclamation concerning me will beat me down and destroy the work He desires to accomplish if I fail to hear, believe, receive, and trust God’s opinion as my own to possess.

Beloved, when I fail to believe what God says of me, I fall to the wayside, giving my mouth and words to worldly endeavors, swayed by every frown of disapproval or the opinion of humankind. In that instant, I do not accomplish the will of God or the work He equips me to do. Instead of helping you and others to know Him better, I become an instrument to push you away. Thus, I must be careful to take captive the thoughts within me and make them believe God so-as-to obey Him.

The world wants us to conform to its image. Those of the world don’t want to feel they fall short of glory, so they want us to look and act like them in order that they may feel better about themselves. Our flesh, the world, and demonic forces want us to doubt God, His existence, and His word, so that we do not reach the full potential He places in us to accomplish His purpose. They taunt us and assault us, just as they did Jesus, making light of the calling and equipping of God in us. They will point out every flaw and the smallest of stumbles and tell us that is who we are. Thus, it is vital we believe God who says we know His voice and follow Him, simply refusing to follow the voice of a stranger.

Our own minds can imagine all sorts of evil and instruct our hearts to deny God’s word and trust our frail, fleshly heart-attitudes as proof of who we are. Failing to believe God, we will walk in the lesser of life and fail to accomplish the great works of God, prepared for us by Him who equips us and makes us able, causing us to stand approved and successful as His servant (Ephesians 2:10; Romans 14:4).

Jesus said something that keeps rolling around in my head for me to speak of self as He did. He said, “Do not let your heart be troubled; believe in God, believe also in Me” (John 14:1).

“Believe in God, believe also in Me.” Jesus believed He was who God said He was and He lived, breathed, spoke and moved out of that understanding.

Beloved, we, too, must come to a faith that says of self, “Believe in God (Father, Son, and Holy Ghost). Believe also in me, that I am and can be and do fully all that God deems true of, for, and from me.”

As we believe all God tells us is true of us, His image bearers, transformed into His likeness, we can take up the gauntlet Jesus passed to us and be His representatives in the world. We can possess the fullness of who we are in Christ and we can do all He says we can do if we will only believe what God tells us about ourselves.