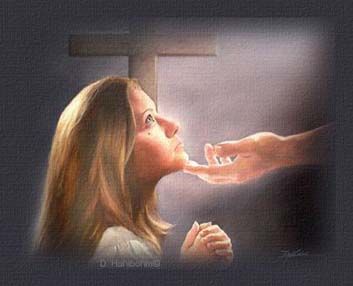 “Peace, be still.” That is the phrase coursing through my mind as I think on this past weekend. A family we greatly love was in for a visit. We were so excited for their arrival, and so exhausted when they left. What exhausted us?

The male head of that family is a man of hot temper. He loses his temper easily, being gruff of speech and very impatient with much frustration coming from his tone of voice and mannerisms. As a result, there was constant fussing among them, bad attitudes in kind from the others of that family, and I felt it within myself at times. Scripture instructs us to avoid men of hot temper, and this rippling of the waters of peace is why we are so warned.

“Do not associate with a man given to anger; Or go with a hot-tempered man, Or you will learn his ways And find a snare for yourself” ~ Proverbs 22:24-25.

It was exhausting to experience; I can’t fathom living in that day after day. Oh, wait! Yes I can.

As I ponder this issue, I remember my younger years and some days since, when my own temper flared in like manner. I too was raised in a home by a hot tempered mother. Thankfully, as I discovered that temper within myself when my children were young, God worked with me to change my ways.

I learned that such temperament is often a bad habit that can be retrained. Learning a new way where temper is concerned begins with “Peace, be still.”

When my children were little and I found myself sounding too much like my mother, I began seeking the Father for a change of temper. “Peace, be still” is the first step revealed to calmer waters of existence. “Be still and KNOW that I AM GOD” (Psalm 46:10-11). I learned to draw near to God and let Him have control of my temper.

Selah ~ Pause and CALMLY think of that.

I learned to send the kids to their room or sit them in a chair or simply say, “be quiet for a bit”, giving me some time with the Lord to calm down. Disciplining when my temper is flared is never a pathway to peace and cooperation. I may elicit obedience with my temper, but not obedience that is coupled with a right attitude. You know what? Heart attitude is vital to true obedience; and we teach our children obedience to God by the way they obey us.

My husband learned to practice this with me and, in doing so, helped me to change my temperament. When an argument rises between us, he will go out to work on some project giving us each time to cool off. Later we can sit calmly together, being able to truly hear what each has to say, and we can come to agreement without arguing and yelling. The important thing is to make sure we come back together to deal with issues in need of attention. Neglecting to do so can breed bitterness as the problem continues unchecked.

Time out allows me not only to get my temper under control, but it also allows me to rightly evaluate the situation. Sometimes I might realize that the real problem is that I am overly tired to the point that kids being kids is that proverbial straw on that proverbial camel’s broken back. That is truer of me now that I am older and no longer used to having children around. I have to be very careful that my being tired does not cause me to sound off in ill-tempered fervor. If that is the case, the time out itself often fixes the problem. I talk to the kids about mom (or now, “Meeme”) being overly tired and in need of them to do something quiet that will allow me to rest. Voila! Peace is restored and we are in good relations again.

At times when a real issue needs to be dealt with, time out calms me enough so we can discuss the issue in ways that allow us to come to an understanding of the right and better way of things. Discipline (training in righteousness) dictated by calmer minds helps the child and parent or husband and wife adjust their way of thinking and doing. When my temper is under control, I am better able to listen to them and understand what they want or need; and I am better able to express my will and reasoning to them in ways that foster cooperation. With a child, when spanking is in order, it is better done in love with reason when calm is the driving force.

Dealing with a child when frustrated and hot tempered breeds frustration and rebellion in the child. It is what scripture refers to when it says, “Fathers, do not exasperate your children, so that they will not lose heart” (Colossians 3:21 ~ this applies to mothers as well). Children – and mates for that matter – who are always assaulted by ill-temper and a bad attitude become people of ill-temper and bad attitude. It is exhausting to live that way because it is like fighting the wind. You know not where and when ill-temper will come, how fierce it will be, or how long it will last. One wind rises up a clashing wave of resistance that hits another and another until the seas of our lives are rolling so hard that destruction is imminent. Scripture rightly warns:

“An angry man stirs up strife, And a hot-tempered man abounds in transgression” ~ Proverbs 29:22.

Temper usually comes when we demand our own way, often unreasonably. It is a god-complex that is sin, demanding always to be in control without thought of God and His ways, and without practicing love toward others, caring for one’s own needs and desires over those of others.

There is hope for us as we learn that “A hot-tempered man stirs up strife, BUT the slow to anger calms a dispute” ~ Proverbs 15:18.

A hot temper is a bad habit that becomes a snare to all touched by it, robbing of strength, energy, love and relationship. But it can be overcome as we “seek first His righteousness” (Matthew 6:33). When we choose to take a time out with some deep, calming breaths, forcing our mind and heart to be still and know God, seeking Him for wisdom, He calms and quiets the storm within just as He did that stormy sea. When we are calm, we then have the capacity to see, hear and know truth, and we can speak wisdom with peace that not only trains up those who hear to walk in righteousness, but it trains them in how to deal with their own temper issues.

Josh McDowell said it well, “Rules without relationship lead to rebellion.” But relationship spawned out of peaceful waters will produce cooperation that calms the tempest. Which do you want for your relationships?