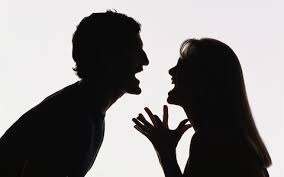 From my understanding of this situation, there’s a reason Paul made this proclamation here and in Ephesians, which is near to Corinth and under the same influences. These women came to the church out of those who worshipped the goddess, Diane (Artemis). They were not used to being submissive. They were business owners, governing leaders, scholars and teachers, and priestess prostitutes, lauded in the worship center.

They were used to being heard and listened to. So, when they didn’t agree with what was being said or done in the business meetings, and when they didn’t understand these strange ways, it is my understanding that they would holler out their opinions and argue with their mates, disrupting and causing chaos in the meeting.

Note also that, reportedly, straight out of Judaism themselves, they still sat with women on one side and men on the other. Imagine the chaos!

Paul gave this mandate, along with the wearing of a head covering in likeness to Jewish tradition, to help the women learn to let their men lead; and so the men, who often were subservient to the women in the Corinthian society, gain their voice.

Also in my understanding, submission is not subservience. The submission God calls us to as women flows out of respect. Respect for God understands the purpose of family and church hierarchy. It obeys God’s call of submission for that purpose, to protect the hierarchical positions and provide for peaceful relations that function well in society. You can’t force true respect or submission. These are heart issues, only changed and made complete under the influence and direction of God’s Spirit.

Coming out of a home that didn’t practice godly submission, and being greatly influenced by women’s lib, it took me a bit to understand God’s way for the family. I have a voice with my husband and the church, but I have learned to trust God to use my influence while still recognizing the leadership responsibilities and authority He has placed in my husband and those who lead our churches.

We all are responsible before God for our role in our life positions. The husband respects the wife by listening and considering her insight and wise council, while seeking God’s will in his decisions and leadership. The wife submits by respecting the husbands final decision and prayerfully helping him lead out of a position of surrendered trust in God and His ways. The church, being a family-oriented organism, functions in much the same way for the purpose of peaceful, organized efficiency.